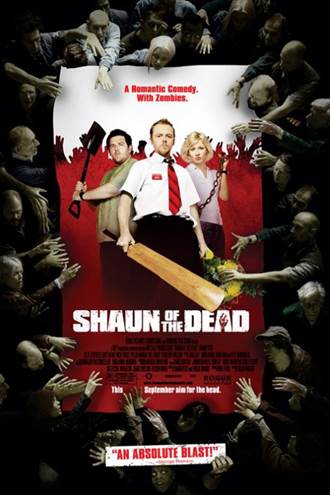 Synopsis: On Friday, Shaun is in a rut. At 29, he's coasted through life--and still hasn't gotten very far, usually winding up at the local pub, the Winchester. His roommate Ed looks up to him--when he can take his eyes off the TV, that is. Liz is re-evaluating their relationship, particularly after Shaun fails to do something special for their anniversary on Saturday. That day, there are train delays, people fainting in the streets, TV news reporters on unexplained calamities. No, it can't be--but it is--the dead have risen. Saturday's isolated incidents mushroom into a full-on zombie assault and, once daylight breaks, it's Sunday bloody Sunday. As manners and flesh take a beating, it's time to separate men from meat, humans from zombies, and living from undead. Shaun and Ed grab whatever is at hand to repel the attacking zombies, summoning reserves of strength they didn't know they possessed and straining muscles they forgot they had. Rounding up friends and family, they press on towards the sanctuary of the Winchester. All that stands in their way are hordes of the flesh eating undead.
Share this: